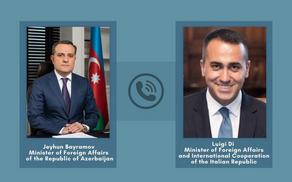 Minister of Foreign Affairs of the Republic of Azerbaijan Jeyhun Bairamov has had a telephone conversation with his Italian counterpart Luigi Di Maio, Azerbaijan's Defence Ministry says.

The Italian Minister reportedly expressed his concern over the tense situation in the region and stressed the importance of ensuring peace.

"Minister of Foreign Affairs of the Republic of Azerbaijan Jeyhun Bairamov informed his colleague of Armenia's aggressive actions against Azerbaijan on 27 September, namely, its move to open fire on civilian populations and pointed out that Azerbaijan is carrying out the corresponding responsive measures to defend itself and ensure peaceful citizens' safety," the statement by the Defence Ministry reads.