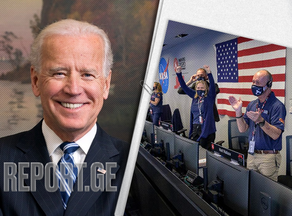 US President Joe Biden has congratulated NASA specialists on the successful launch of the Perseverance rover on the Red Planet. The acting head of the US Space Agency, Steve Jurczyk, shared the news at a briefing.

"About an hour after landing, the president of the United States called me. The first thing he said to me was, Congratulations," Jurczyk said.

In addition, the acting head of NASA also added that the American leader is proud of the agency's achievements and asked to congratulate the specialists involved in the development, launch, and maintenance of the rover on this success.

The Perseverance rover landed on Mars on Thursday. The event was broadcasted on NASA's YouTube channel. A few minutes later, experts posted the Red Planet's first picture taken from the device on Twitter.

The Perseverance rover is known to have 23 cameras and two microphones for transmitting HD video and audio from Mars. NASA experts hope to find traces of life existing on Mars in the distant past.