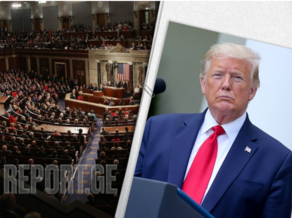 The US House of Representatives has supported the impeachment of Donald Trump. The incumbent President of the United States' impeachment was supported by 232 congressmen, while 197 went against it.

Among the supporters of Trump's impeachment were ten Republicans.

According to a resolution submitted by Democrats, the incumbent President of the United States is accused of inciting an attack on Congress on January 6.

This is the first time in US history that an incumbent president has been impeached for a second time.

The term of office of the President of the United States expires in seven days. The inauguration of President-elect Joe Biden is scheduled for January 20th.