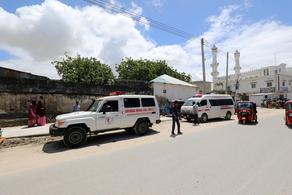 Eight people died, and fourteen are wounded in a military facility in Mogadishu, Somalian capital. According to Reuters, the explosion occurred at the stadium.

Reportedly, the soldiers opened fire after the explosion.

The Somalian army officer, Major Abdula Mohammod, said a militant, sitting in the mined car, accomplished the explosion. None of the terror organizations claims responsibility for the act.