Erdogan calls on Armenia to leave Karabakh while talking to Stoltenberg 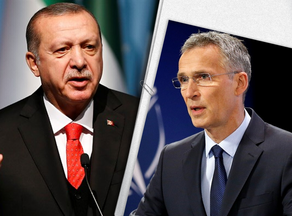 The President of Turkey received the Secretary-General of NATO, Jens Stoltenberg. At a meeting in Ankara, Recep Tayyip Erdogan said that Armenia should leave the occupied territory of Azerbaijan. The press service of the Turkish leader spreads the information about the statements made by the President.

The meeting between the Secretary-General of the North Atlantic Alliance and the President of Turkey took place behind closed doors and lasted for more than an hour.

Erdogan noted that the UN Security Council's decisions and the OSCE call on Armenia to leave the occupied territory of Azerbaijan immediately and without any preconditions.

The President of Turkey and the Secretary-General of NATO also discussed the relations between the country and the Alliance, as well as the situation in the Eastern Mediterranean region, Libya, and Syria.

The Secretary-General thanked Turkey for its contribution to NATO missions and its support of Allied countries during the pandemic. Jens Stoltenberg once again noted that he welcomes the mechanism designed to reduce the risk of incidents in the Mediterranean.