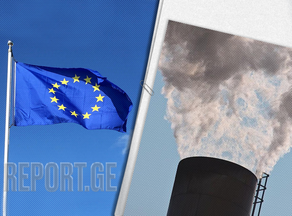 Following night-long discussions at their two-day summit in Brussels, the 27 member states approved the EU executive commission’s proposal to toughen the bloc’s intermediate target on the way to climate neutrality by mid-century, after a group of reluctant, coal-reliant countries finally agreed to support the improved goal, France 24 reports.

"Europe is the leader in the fight against climate change,” tweeted EU Council president Charles Michel as daylight broke over the EU capital city. “We decided to cut our greenhouse gas emissions of at least 55% by 2030.”

German Chancellor Angela Merkel said the 21-hour summit during which the climate debate was a constant worry, had much to show for it. “It was worth having a sleepless night," she said.

Five years after the Paris agreement, the EU wants to be a leader in the fight against global warming. Yet the bloc’s leaders were unable to agree on the new target the last time they met in October, mainly because of financial concerns by eastern nations seeking more clarity about how to fund and handle the green transition.

But the long-awaited deal on a massive long-term budget and coronavirus recovery clinched Thursday by EU leaders swung the momentum.

Large swaths of the record-high 1.82 trillion-euro package are set to pour into programs and investments designed to help the member states, regions and sectors particularly affected by the green transition, which are in need of a deep economic and social transformation. EU leaders have agreed that 30% of the package — some 550 billion euros — should be used to support the transition.

Still, agreeing on common language was not an easy task. Negotiations were punctuated throughout the night by intense discussions in the plenary session and multiple chats in smaller groups on the sidelines.

Another delay in revising the EU’s current 40% emission cuts objective for 2030 would have been particularly embarrassing before the virtual Climate Ambition Summit marking five years since the Paris deal, and leaders worked to the wire to seal a deal.

The event on Saturday will be co-hosted by the U.K. with the United Nations and France.

French President Emmanuel Macron praised “a major signal” that will enable EU leaders “to bring in our wake our big international partners, especially the United States and China.”

British Prime Minister Boris Johnson announced last week he wants the U.K. to cut greenhouse gas emissions by at least 68% from 1990 levels by 2030 — a more ambitious goal than the EU’s.