Fire in the French nuclear submarine 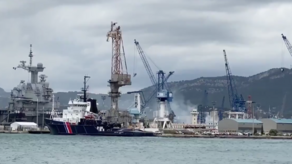 The fire broke out at 10:35, local time for the reason of technical glitch. Forty people were on the board at that moment; none of them suffered.

According to the local government, an operating failure became the reason for the accident. Fire smoke does not contain nuclear substances.