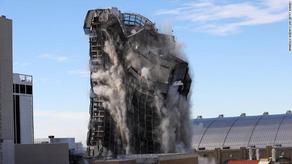 A hotel and casino in Atlantic City, New Jersey, that was once owned by former President Donald Trump was demolished Wednesday morning.

The former Trump Plaza Hotel and Casino has been closed since 2014. The building, once a staple on the boardwalk, had deteriorated so much in recent years that chunks of it had started to peel off.

By 9:08 a.m., it had been destroyed, leaving behind a large pile of rubble and smoke.

Bernie Dillon, the former events manager for the casino, said the hotel used to be a hot spot for celebrities.

Former President Trump cut ties with the casino in 2009 after a series of bankruptcy filings.https://t.co/MeQpmoGExN pic.twitter.com/GpocEJJJaB

Trump Plaza tower comes tumbling down with a blasting Atlantic City this morning a few minutes after 9 am pic.twitter.com/x7pDz69wDn

Once a Boardwalk staple, Trump Plaza Hotel and Casino has been closed since 2014. pic.twitter.com/DM7eBB3gEY