Ilham Aliyev lays foundation of a new mosque in Shusha 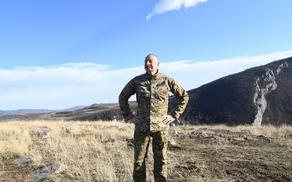 The President of Azerbaijan, Ilham Aliyev, laid the foundation of a new mosque in Shusha. The First Lady, Mehriban Aliyeva, and daughters, Leyla and Arzu, attended the ceremony.

Aliyev noted that the decision to build a new mosque in Shusha had been made for a long time, and after the release from occupation, he began to think about its architecture.

"I finally came to the conclusion that this mosque, its architecture should be of a symbolic nature. Therefore, I suggested that the shape of the mosque reflect the number 8. Because on November 8, we liberated Shusha, and this data is already the day of victory in Azerbaijan. The two minarets of the mosque should reflect the number 11. In the eleventh month, Shusha and Karabakh were completely liberated from occupation. Based on these ideas, the architects started working, and here is the exterior of the mosque. This is the initial version that needs to be worked on first, and it may change," Aliyev said.

According to Aliyev, soon, the architects will start working on the entire project of the mosque, and construction work will begin.