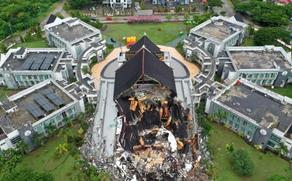 Indonesia’s disaster mitigation agency said no damage or casualties were reported from the Magnitude 5.0 aftershock in the West Sulawesi districts of Mamuju and Majene a day after the Magnitude 6.2 earthquake.

Agency head Doni Monardo told Kompas TV the search continued for victims who could still be trapped under rubble.