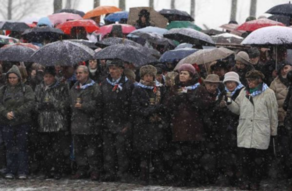 Survivors of the Auschwitz concentration camp celebrate Holocaust Remembrance Day online due to the pandemic.

One of the survivors, Tova Friedman, hoped to celebrate this day with eight grandchildren and take them to see a former Nazi camp in Poland.

On January 27, 1945, thousands of prisoners at the Auschwitz concentration camp were released. In November 2005, the United Nations adopted a resolution declaring January 27 as International Holocaust Remembrance Day.