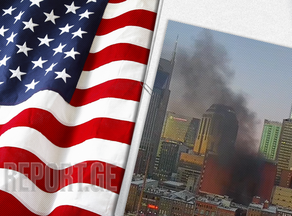 A massive explosion has rocked the US city of Nashville, with claims of "glass and steel everywhere" and police on the scene.

Meanwhile confusion reigns about the cause of the blast, with one media outlets suggesting it was the result of a car bomb, and another saying there was no evidence of foul play. Fire crews were called to 166 2nd Avenue North at 6.45am local time. Phil Williams, a reporter with News Channel 5, tweeted: "Nashville police and fire setting up radiation monitors to assess situation in downtown area near explosion site. This is all precautionary at this point.