Number of killed in train fires in Pakistan increased 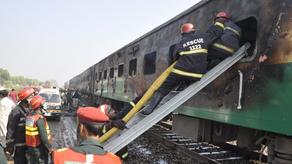 Death toll increased to 75 as a result of the fire on the train travelling from the Pakistani city of Karachi to Rawalpindi.

According to the latest data, 40 people were injured. The condition of 11 is critical.

The accident happened near the town of Rahim Yar Khan in the south of the Punjab Province. The fire was caused by the burning of a cooking stove. Passengers were trying to cook on a small cooking stove, which contradicts traffic rules. The stove burned and the blaze spread to at least three carriages.