President of Turkey paying an official visit to Azerbaijan - PHOTO 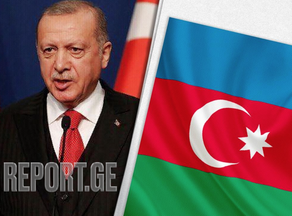 At the Heydar Aliyev International Airport, where the state flags of the two countries were hoisted, the Turkish leader and his wife Emine Erdoğan were met by the First Deputy Prime Minister Yaqub Eyyubov, the Deputy Minister of Foreign Affairs Khalaf Khalafov, and other officials.

Turkish President Recep Tayyip Erdoğan is accompanied by the Minister of National Defense of Turkey, Hulusi Akar, Head of the Presidential Administration Communications Department Fahrettin Altun, and Justice and Development Party spokesman Ömer Çelik as well as the head of the Turkish group of the NATO Parliamentary Assembly, Osman Ashkin.