Putin and Erdogan discuss work of monitoring center in Karabakh 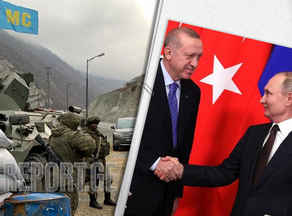 Turkish President Recep Tayyip Erdoğan had a telephone conversation with his Russian counterpart Vladimir Putin and discussed the Azerbaijani joint center's activities for the ceasefire in Nagorno-Karabakh. The leaders also discussed issues related to resolving the situation in Libya and Syria, the administration of the Turkish leader reports.

"During the talks, steps taken to improve relations between Turkey and Russia were discussed, as well as regional issues. President Erdoğan said Turkish and Russian experts could meet with their Azerbaijani counterparts to make more efficient use of the transport routes, which are being restored following the January 11 agreement. Erdoğan noted that the Joint Center in the Aghdam region is successfully carrying out the task of monitoring and supervising the ceasefire in Karabakh," reads the statement.