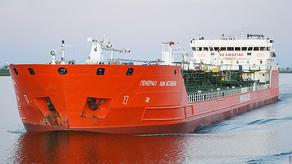 Three people were reported missing after an explosion took place on a Russian oil tanker.

The tanker was traveling through the Kerch Strait towards the port of Rostov-on-Don on Saturday, the Russian federal maritime agency said.

As Reuters reports, Tanker Azi Aslanov was not carrying any oil, and leftover fumes likely triggered the explosion.