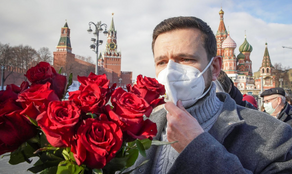 With a minimal police presence at the scene, opposition supporters laid flowers on the bridge in central Moscow where Nemtsov was gunned down on the night of February 27 six years ago.

Nemtsov briefly served as deputy prime minister in the late 1990s before joining the opposition, and Russian news agencies said the ambassadors of several Western countries were among those who attended Saturday’s commemoration.

“Nemtsov was one of the best. A decent, intelligent, handsome man and a free man. And he wanted our country to be free,” said Valeriya, 58, holding two carnations.

“Unfortunately, those who want to drive our country into obscurantism are now temporarily winning. I just want to live a normal life and not be afraid of anyone around.”

Bely Schetchik, a group that monitors attendance at protests, said more than 8,000 people had taken part in the event as of 6 p.m. local time (1500 GMT), Reuters reports.