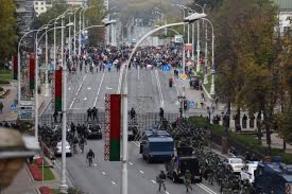 Tens of people were detained by police in Lida's town in western Belarus on Sunday during a protest.

Protesters have been gathering ahead of the expiry at midnight on Sunday of an ultimatum for Belarus President Alexander Lukashenko to resign, the latest in 11 weeks of demonstrations following a disputed election result.