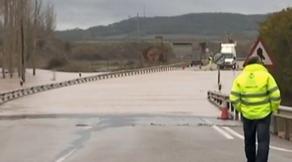 Eight people became the victims of the storm in Spain, Portugal, and France. The storms named Elsa and Fabien passed through the European countries.

The airports are operating in restricted mode. Flights are canceled, the railway does not operate. Italy and Great Britain count losses caused by the storms.

The rivers of Great Britain overflow as a result of the storms. Tornado damaged houses and automobiles.