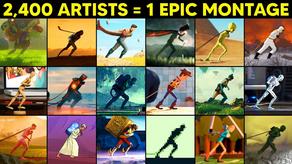 Clinton Jones, a 3D artist, who lives in California, has created a short animation showing a person dragging something. He called on colleagues worldwide to come up with their versions of the characters and worlds. The result was a three-hour video with thousands of works.

The video has one texture but a different world and subtext. According to the authors, the same character finds himself in different situations in parallel worlds.

In two months, the challenge became very popular. Jones was sent thousands of options - from a polar expedition and a walk from a Chinese plantation to a fictional world. There was even a dramatic escape from a World War II concentration camp.

The artist was fascinated by 2.4 thousand works, so he released two videos - a three-hour video with all the works and a separate video with a top 100.

Clinton Jones posted the video on his YouTube channel.