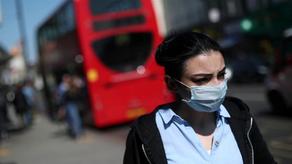 Coronavirus deaths have jumped to more than 21,600 after 586 people died - with the true death toll likely to be higher.

Positive cases have also risen by 3,996 to 161,145 as Britain grapples with week six of drastic lockdown measures.

The government confirmed tonight the total number of deaths in hospital in the UK is now at 21,678.

This is the lowest Tuesday rise in four weeks after the usual weekend lag when 381 were reported dead on March 31.

But new figures from the Office for National Statistics today found the true death toll could actually be 54 per cent higher once victims outside hospital are factored in.