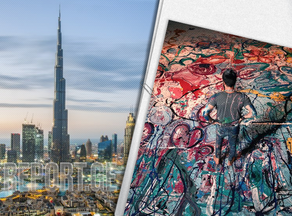 Frames of the world’s largest art canvas – ‘Journey of Humanity’ – measuring 1,500 m2, will be going on auction in Dubai to raise money for children charities in developing countries, British artist Sacha Jafri announced on Thursday.

The canvas will be divided into 70 smaller frames of different sizes, and will be up for sale over the next two years. The objective is to raise at least 25 million euros.

Sacha Jafri has worked on the fresco – which is as big as two football fields – in the hotel where he has been confined during the last year.

Children from 140 countries indirectly participated in the work by sending in their paintings.

The Dubai based artist has used almost 5,000 litres of paint and around 1,000 brushes to complete the project, which has entered the Guinness book of World Records as the largest art canvas in the world.

“I don’t want this to be an isolated initiative. I really want to help change the world, and the way to do that is to give the poorest communities access to internet,” the artist told AFP.