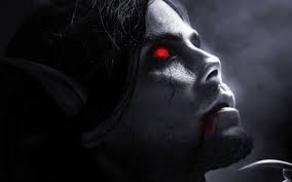 The movie, starring Jared Leto, has set a new release date of April 1 amid the omicron surge. It had been set to open in theaters on Jan. 28.

The Sony and Marvel film had already been delayed several times due to the COVID-19 pandemic. In January, Sony announced that the film would move from October 2021 to early 2022.

Morbius stars Leto as Dr. Michael Morbius, a scientist who suffered from a rare blood disease and turned himself into a living vampire during an attempt to cure himself.

Adria Arjona, Matt Smith, Tyrese Gibson and Jared Harris also star in the film, which is directed by Daniel Espinosa.

Michael Keaton, who played The Vulture in Sony and Marvel Studios’ Spider-Man: Homecoming, also appears in some capacity in the film, apparently reprising his role.

The first trailer for Morbius suggested for the first time that Sony Pictures’ Universe of Marvel Characters is connected to Disney’s Marvel Cinematic Universe, not only by the inclusion of Keaton, but also by street signs calling Spider-Man a murderer.

The Morbius news comes as Sony and Marvel celebrate the blockbuster performance of Spider-Man: Far From Home.