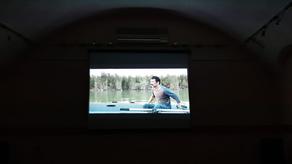 Screening of modern Azerbaijani films was held within the framework of the "Cultural Calendar" project in the "Caucasian House" in Tbilisi. The main goal of the event was to introduce regional films to Georgian viewers.

According to the project coordinator Marika Tkeshelashvili, the event created a certain idea about the films produced in the neighboring country, their content, and their aesthetic features.

"The content of films are similar to reality often found in Georgia - characters, social life, etc. Unfortunately, we know little about the films made in the region, both new and old, even though we are neighbors. We periodically try to organize events like this in order to get acquainted with the regional cinema," she said.

Within the framework of the project, the 2013 film "Chameleon" by young directors Elvin Adigozel and Rufat Hasanov and the debut film "Down the River" shot by Asif Rustamov in 2014 were shown. Both films have received prestigious awards at international film festivals.