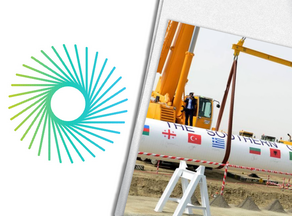 The price of gas transported via The Trans-Adriatic Pipeline (TAP) is often not connected to the oil price.

Vugar Veysalov, the head of external affairs at the TAP, said that the TAP might alter the fundamental principles and have a game-changing impact on the gas supply market. He brought Italy as an example, saying that the country's gas system will become far more flexible for business thanks to the TAP.

Vugar Veysalov also added that the TAP managed to set aside about 5pc of the line's initial capacity for short-term bookings, in addition to capacity that has already been booked. This short-term capacity has been set aside for at least the first 25 years from its commissioning date.

The (TAP) is ready for commercial natural gas transportation from Azerbaijan to Europe, according to the Consortium TAP AG.

The consortium said that about 4.5 years after the beginning of work in Thessaloniki, the pipeline is ready to carry gas. It means that the "Stage-2" and "Southern Gas Corridor" development of the Shah Deniz field is fully implemented, and these projects will primarily change the energy map of the Caspian region concerning Europe.

BP, a TAP shareholder, explains that after the completion of the last phase of the Southern Gas Corridor, this huge export system is fully integrated and ready to transport gas to Europe.

"This will allow us to transport Azerbaijani gas to Europe for the first time and, as a result, achieve the main goal set at the start of the project," the statement said.

The cost of the project was $ 40 billion.

The TAP AG Consortium released a statement on the pipeline's completion on 13 October. The pipeline connects with the Trans Anatolian Pipeline (TANAP) at the Turkish-Greek border in Kipoi, crosses Greece and Albania and the Adriatic Sea, before coming ashore in Southern Italy. It is 878 kilometers long, of which 550 runs through northern Greece, 215 kilometers in Albania, and 105 kilometers on the Adriatic seabed, the remaining 8 kilometers in Italy. TAP is the last component of the Southern Gas Corridor, a continuation of TANAP. The TAP pipeline connects to the Trans-Anatolian Pipeline - TANAP on the Turkish-Greek border, cross Greece, Albania, and the Adriatic Sea, and then runs off the coast of southern Italy. This pipeline should transport 10 billion cubic meters of gas annually to Europe.

As for Georgia’s benefit from the Southern Gas Corridor, Georgian experts say that the pipeline will provide Georgia with economic and political dividends.

According to experts, after the TANAP launched operation, the volume of gas passed in the Georgian territory via the Southern Gas Corridor gradually increases. By 2024-2026 and afterward, the gas volume may reach 22 bln cubic meters, which will allow Georgia to receive 1.1 bln cubic meters of gas at a discount annually. It enables Georgia to enjoy the considerable fiscal effect, as the optional gas price received from the South Caucasian Pipeline is about 2.5-3 times lower than the market price of the Russian or Azerbaijani gas in Georgia.

No similar effect was available before the commissioning of the Southern Gas Corridor, including TANAP. Political and social impacts of the development of the South Caucasian Pipeline, TANAP and TAP pipelines, are far essential. If Georgia was only a gas transit country of regional importance (it carried out the Azerbaijani gas transit to Turkey, and Russian gas transit – to Armenia), it has become an international player now.

Initially, Turkey will be supplied with 2 to 6 bcm of Azerbaijan natural gas. After 2020, when the TAP officially joins the SCP and the TANAP, 16 bcm of gas will be transported through the corridor, out of which Italy will receive ten bcm.

The project comprises the key components as follows: the Trans-Anatolian Natural Gas Pipeline (TANAP) and the Trans Adriatic Pipeline (TAP).

The foundation for the Southern Gas Project was laid on 25 February of 2014, with its 51% owned by Azerbaijan represented by the Ministry of Economy and 49% by the SOCAR.

Detailed information on the TANAP, TAP, and the Southern Gas Corridor is available on Report.ge.