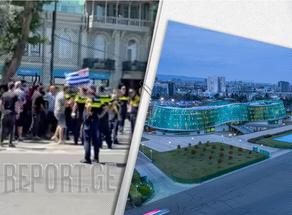 The MIA of Georgia says that following the investigation activities, they determined that violent crimes have been committed against 55 citizens, with 53 being representatives of different media outlets.

Eight law-breaking citizens have been detained after they committed administrative offenses.

According to the state agency, the investigation of violent offenses against the Shame Movement and the Tbilisi Pride Office, as well as cases of hampering journalists from performing their duties is in progress.

The statement by the agency goes on to say that instances of breaking the law have resulted in inflicting injuries upon a citizen near a non-government building. The investigation of the case is also reportedly underway.

The statement concludes that the MIA condemns violence and will adequately respond to unacceptable actions.