One person arrested for injuring person in Tbilisi 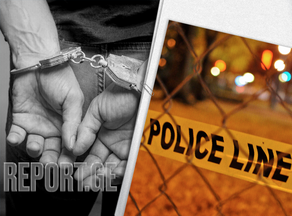 The officers of Gldani-Nadzaladevi Main Division of the Tbilisi Police Department detained N.D., born in 1982, convicted several times in the past, as a result of operative-investigative actions. He was arrested on charges of attempted premeditated murder. The Ministry of Internal Affairs informed report.ge about the crime.

According to them, the crime envisages imprisonment for 7 to 15 years.

"The investigation established that the accused man fired several shots from a firearm in the direction of one of his acquaintances - D.M., born in 1987, on December 13 of this year, on Lomtatidze Street, Tbilisi, on the territory of one of the residential buildings on the ground of past dispute. D.M. was wounded as a result.

The accused fled the scene. The wounded man was taken to a hospital where he underwent surgery. His life is not in danger.

Police arrested N.D. the next day after the incident.

The fact of attempted premeditated murder is being investigated under Article 19-108 of the Criminal Code of Georgia," the statement reads.