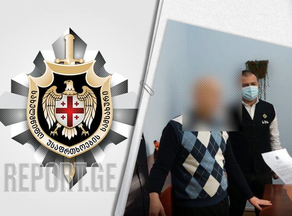 In cooperation with Tbilisi Municipality City Hall, the Anti-corruption Agency officers, as a result of operative-searching and investigative activities, detained the deputy head of Chughureti district based on the judge's ruling on the fact of exceeding official powers on January 25, the agency reveals.

"Investigation establishes that an e-tender on strengthening works of an apartment house located in Chughureti district, Aragvispireli st. 32, worth GEL 126 572, was announced on April 30, 2020. Two companies expressed their wish to participate in it.

Deputy head of Chughureti district, as a responsible person for the tender commission, while exceeding his official powers, summoned to his office on May 29, 2020, a representative of one of the Ltd participating in the tender and stated that the desired company should win the tender and due to this, he would not have to take part in the procurement. Otherwise, he would face problems in the course of carrying out the works. In exchange for the mentioned, in breach of official duties, he suggested adjusting the terms of tenders to be announced in the future for him.

Considering the pressure carried out from the deputy head of the district, the Ltd. participated in the tender in full compliance with the provisions of the legislation and won the tender with the lowest price. The public servant, upset by the mentioned fact, started to create problems for the mentioned company. He was fully informed by his subordinates on faultless implementation of the works, based on which the contract envisaged gradual delivery of works and payment, the deputy head using his official position, imposed wrongful pressure on supervision of the works and did not give the right to deliver the implemented works. As a result of the mentioned activities, the production company faced artificial problems, and the contract has been terminated.

As a result of unlawful activities carried out by the deputy head of Chughureti district, the company was unable to continue the works envisaged by the project; thus, the strengthening works of the apartment house have not been implemented to date, which has substantially violated the lawful interests of the local residents, as well as those of the production company and the state," the statement reveals.

The investigation is carried out following Article 333, part 1 of the Criminal Code of Georgia, carried out by the Anti-corruption Agency of the State Security Service.