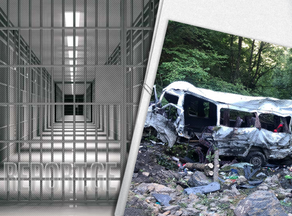 According to the Ministry of Internal Affairs, the Mtskheta-Mtianeti Police Department officers and Shida Kartli and Mtskheta-Mtianeti District Prosecutor's Office, as a result of joint operative and investigative actions, based on the judge's decision, arrested two persons Sh.B., born in 1986, and G.G., born in 1966.

According to the agency, they are accused of launching technically faulty vehicles, which resulted in the death of two or more people.

"On August 23, 2020, 17 people were killed, and three others seriously injured in a car accident near the village of Biso, Dusheti Municipality. As a result of the investigative actions, the law enforcers arrested the director of the travel company "Travel G" Ltd. Sh.B., born in 1986, and the owner of a passenger minibus rented by the same company - G.G., born in 1966. The investigation is underway under Article 277, Parts 1 and 3 of the Criminal Code of Georgia, which stipulates the operation of a technically defective vehicle, which resulted in the death of two or more people," the information spread by the Ministry of Internal Affairs reveals.

The offense carries a maximum sentence of 6 to 10 years in prison.

On August 23, a minibus fell from a height of 80 meters on a rocky slope on the Shatili road, near the village of Biso. Seventeen people were killed in a car accident.