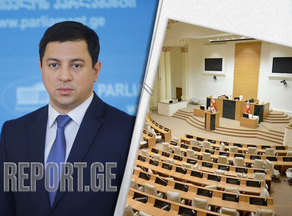 "When you say that a violent attack on the legal order and constitutional institutions of the country is normal and you take it as freedom of expression, in any democratic state, the answer is what happened in this case. It is the fulfillment of a legal decision," the Chairperson of the Parliament of Georgia, Archil Talakvadze, told journalists.

According to him, the state compromised, Melia was offered to pay bail; otherwise, he knew he was in danger of imprisonment.

"It is obvious that he deliberately chose the most provocative way and deliberately chose to escalate the process. Today we saw that the law enforcement agencies performed their duties without excessive force and arrested Nika Melia completely transparently in front of the public. He will appear before a fair court and will have the opportunity to argue over the issues and present his arguments," said Archil Talakvadze.