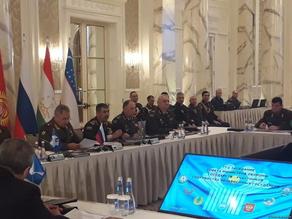 The meeting of the Commonwealth of Independent States defense ministers started in Baku. Sergey Shoygu, the Defense Minister of Russia opened the meeting.

At the meeting, Lebedev noted that the world is not at peace and that NATO is actively increasing militarization near the borders of the CIS countries. Lebedev also said that the fight against terrorism is not over yet and that fascism and Nazism are being actively propagated all around the world. According to him, active cooperation of CIS countries is very important.