Faculty of Azerbaijani Language to open at TSU 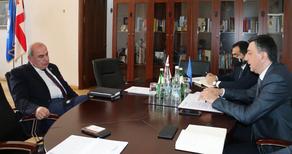 According to the Rector, he is glad to see the Ambassador of Azerbaijan in Georgia at the historical school, adding that cooperation between the strategic partner countries is growing in all areas, including education.

According to Shervashidze, he took part in the event dedicated to the 100th anniversary of BSU in Baku on November 26, 2019. He said he is proud of the development of Azerbaijan and is ready to cooperate with Azerbaijani universities.

The meeting focused on establishing the Faculty of Azerbaijani Language and Literature at TSU and ways to eliminate the shortage of staff in Azerbaijani-language schools in Georgia.

The Ambassador thanked the TSU Rector for support.

Later, the Ambassador of Azerbaijan got acquainted with the reconstruction and restoration works at the Heydar Aliyev Center. According to the TSU administration, the renovation of the center will be completed at the beginning of the next academic year.