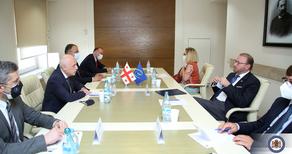 The Georgian Foreign Minister informed the PACE President of the grave humanitarian situation in Georgia's breakaway regions, violation of human rights by the regime, commonplace abductions of citizens of Georgia, and, namely, Georgian Zaza Gakheladze, who was in illegal custody, but thanks to all-out efforts by the international partners and their support, he has been released. Zalkaliani also stressed that other Georgians are now in unlawful custody, and the international partners' backing is paramount for them to be freed.

The parties also focused on the current developments in the country and the upcoming self-government elections.

At the end of the meeting, the PACE President reaffirmed his support for Georgia's sovereignty and territorial integrity and thanked the Georgian foreign minister for close cooperation and warm reception.