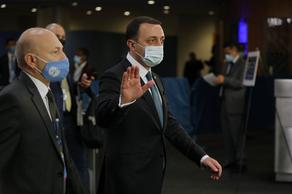 The Georgian delegation led by PM Irakli Gharibashvili was present at the opening of the 76th session of The UN General Assembly (UNGA) in New York.

The UN Secretary-General, the General Assembly President, the US President, and the Brazilian leader addressed the session participants.

The main topic of the 76th session of the UNGA is "increasing countries' resilience by giving them hope to help people recover from the novel coronavirus, assist countries in restoring their economies, to adjust to the planet's needs, respect human rights and revitalize the UN.''

The Georgian PM will address participants of the 76th UNGA session on 24 September.

Foreign Minister Davit Zalkaliani, Minister of Education and Science Mikheil Chkhenkeli, and head of the Administration of the Government of Georgia Ilia Darchiashvili are members of the Georgian delegation led by PM Gharibashvili.