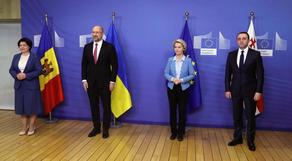 According to the Administration of the Government of Georgia, Gharibashvili, Shmyhal, and Gavrilita pointed out that the objective of the three associated countries' prime ministers is to reaffirm their readiness to accelerate their integration in the EU, summarize the results achieved and plan their further moves.

They also stressed that political association with the EU, consolidation of democracy, enhancement of the rule of law, and protection of human rights are principal values on which the EU integration rests. Additionally, they focused on the Deep and Comprehensive Free Trade Agreement (DCFTA), opening up unprecedented opportunities for the three countries for further economic integration.

Emphasis was also made on the necessity of strengthening transport and communication links and the Black Sea potential, ensuring the development of ties with the EU.

The meeting also revolved around the topic of sectoral integration, envisaging approximation of the policy of the different fields to the EU standards and norms. The associated trio proposed that regular meetings between sectoral agencies, with the commissioners' and ministers' involvement, be organized.

Reference was also made on the declaration of the future Eastern Partnership Summit, which should comprise the associated trios' priorities.