Gharibashvili sets up government commission to develop a de-occupation strategy 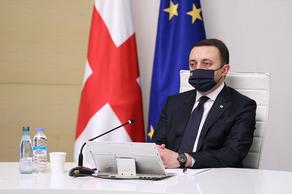 By the decision of the Prime Minister of Georgia, a governmental commission to develop and implement the "Georgian State Strategy for De-occupation and Peaceful Conflict Resolution" got established.

According to the information spread by the government administration, a working group will be set up within the governmental commission, which will develop an inclusive and comprehensive state strategy by the end of the year, with the involvement of the general public. The Ministry of Foreign Affairs will head the commission and working group.

"A unified state approach and strategic vision will be developed in the direction of de-occupation, unification, and peaceful settlement of the conflict. The process will involve government agencies and institutions, as well as civil society - research centers, NGOs, experts, people affected by the conflict and the general public," reads the information.

According to the government administration, a number of meetings, dialogues, discussions, consultations will be held by the end of the year, both at the inter-agency level and with the involvement of civil society to develop a state vision for a peaceful and united Georgia tomorrow as part of a common national process.

"At the same time, an intensive work process will be conducted with Georgia's strategic partners in order to bring the process of de-occupation and peaceful settlement of the country into active action with the proactive and effective involvement of the international community," mentions the information.