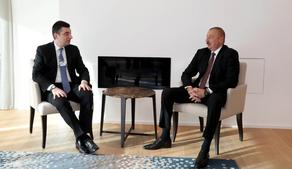 Within the framework of the World Economic Forum in Davos, Georgian Prime Minister Giorgi Gakharia has met with President of Azerbaijan Ilham Aliyev, according to the Prime Minister's Press Office.

"Another meeting between the Georgian Prime Minister and the Azerbaijani President in the short term points to high dynamism in the bilateral relations.

The high officials centered on the strategic partnership between Georgia and Azerbaijan, urban transport and energy projects of regional significance, being implemented by the two countries through joint efforts, as well as issues at the top of the agenda.