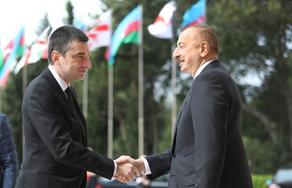 According to The Prime Minister, Georgia and Azerbaijan are strong partners. The cooperation between two countries in the energy and transport fields is a subject of international importance.

“We have discussed important issues of economic cooperation such as trade, transport and mutual investments. Also planned certain steps to deepen our cooperation. The meeting of the Economic Cooperation Commission between two countries has not been held for the last ten years but after our meeting we have decided that the first step will be taken in the second half of November and the commission will be assembled", Giorgi Gakharia said.

The President of the Republic of Azerbaijan hosted the Prime Minister of Georgia at the Zagulba Palace on October 9.