Government's one of top priorities is caring about people, Kaladze says

Government's one of top priorities is caring about people, Kaladze 2 September, 2020  23:50 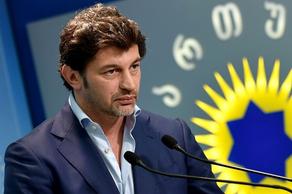 After the Georgian Dream Government came into power, it set the aim of caring about people, ending their oppression, and delivering justice, Kakha Kaladze, the Director-General of the Georgian Dream Democratic Georgia, said when he presented Giorgi Khojevanishvili, the majoritarian deputy candidate in Gori and Kaspi municipalities.

In Kaladze's words, residents of Gori understand better than others what occupation means.

"You, the residents of Gori, know better than others what occupation means - the non-healing wound which hurts daily. You know perfectly well what kind of grave results politicians' wrong steps may yield.

You remember how the previous government swallowed Russia's bait, and instead of apologizing to their people for the crimes they committed, they subjected their own people to repressions more actively. I was involved in the 2012 election campaign, met with lots of acquaintances back then, and visited all villages in the vicinity of Gori. We remember the aggression we faced there, with this proving that the battle was life and death for freedom and justice. The Georgian people gained a victory in this battle," Kaladze declared.