I don't know what I ruined - Gvaramia responds to scandalous recording 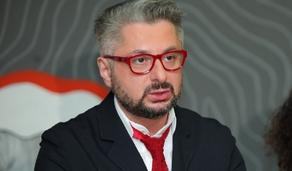 "As a professional, I can tell you that the recording of Saakashvili-Adeishvili's conversation is not authentic," Nika Gvaramia, the head of Mtavari TV, responded to the scandalous recording, published by the Ukrainian website, where Saakashvili and Adeishvili are talking about him.

"I heard a secret recording. I don't know what I ruined. The only thing I can tell you is that for me, it is not a valid source that I would rely on. This record is fake. However, some things can be read about this topic. It is not legal or authentic. There is no higher interest for me than changing the government of the Georgian Dream, bringing the democratic government in Georgia, with free media and freedom of speech. Despite all this, there is no higher goal for me than protecting human life, especially of my employee, especially Giorgi Gabunia, who is my closest friend," Gvaramia said.