Irakli Gharibashvili: As soon as he sets foot on our land, he will be arrested 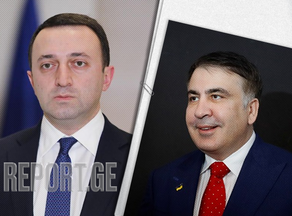 "This man has been threatening to come for eight years, but he can not do so because he is a coward. He knows that he will go to prison," Prime Minister of Georgia Irakli Gharibashvili said while talking about the third President of Georgia, Mikheil Saakashvili.

According to the head of the government, Saakashvili's only task and his goal are to create unrest, destabilize the country and bring chaos.

"His only wish and goal are to return to power, which is an unattainable dream for Saakashvili and his murderous, oppressive team. Suppose this coward man arrives, none can oppose law enforcement, and those who do will go to prison. We guarantee this in the name of law and the state.

Of course, Saakashvili deserves prison because he has harmed our country, our population. The calls that people will protect him, of course, are complete lies and fabrications. Saakashvili will be met by hundreds of thousands of people angry with him," the prime minister said.

The third President of Georgia, Mikheil Saakashvili, bought a ticket for the Kyiv-Tbilisi flight.

Saakashvili plans to arrive in Georgia on October 2, Election Day.