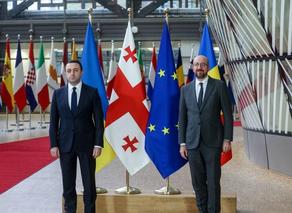 ''Great talks with EU Council President Charles Michel in the frames of Associated Trio format. Adherence to shared European values remains at the core of our integration. Grateful for the EU firm support for sovereignty & territorial integrity of our states,'' Gharibashvili tweeted.