Kakha Kaladze and Irakli Kobakhidze met with MEPs in Strasbourg 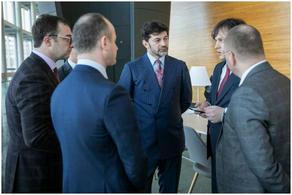 Kakha Kaladze, the Secretary-General of Georgian Dream, and Irakli Kobakhidze, the Executive Secretary of the party, held bilateral meetings in Strasbourg.

The party leaders met with MEPs Michael Gahler, Sandra Kalniete, and Sven Mikser. Discussions focused on the implementation of the Association Agreement obligations, planned and ongoing reforms, political processes in Georgia, and the pre-election environment.

"We had very productive meetings. We informed our friends about the political situation in the country. As for the elections, we emphasized that we will do our best to have a transparent, free and peaceful environment during elections," Kakha Kaladze said.

According to him, they discussed the detention of Gigi Ugulava. Party leaders informed MEPs that the case had nothing to do with politics.

"Our mission was to provide detailed information to our partners, members of the European Parliament," Irakli Kobakhidze said.

As for Gigi Ugulava, according to the press service, Irakli Kobakhidze stated that there are no questions regarding the case neither in Georgia nor abroad. The only matter is whether or not elections have anything to do with Ugulava's arrest. The partners know that in Georgia, there are elections nearly every year, and investigations must not be interrupted because of that.