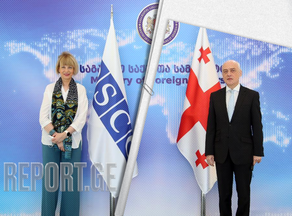 The OSCE Secretary General thanked the Georgian government for the facilitation between Armenia and Azerbaijan. Helga Maria Schmid made the statement after the meeting with the Minister of Foreign Affairs of Georgia.

The Secretary-General noted that the goal was achieved through the effectiveness of many actors.

"I want to thank the Georgian government for the facilitation process between Armenia and Azerbaijan in restoring trust. It was an example of extraordinary central cooperation between different actors, including the participation of the OSCE led by the EU and Sweden. We talked about regional cooperation in the South Caucasus, where the OSCE will remain active," the Secretary-General of the organization said.