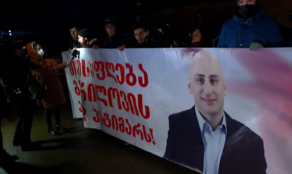 A protest rally is underway outside the Georgian Dream Central Office, in which the ruling party meeting is in progress.

Civic activists protest against Nika Melia's detention with banners in their hands, which reads: "Freedom to Gavrilov's personal prisoner."

The ruling party convened the meeting at 8 p.m. One of the issues under discussion proves to be Nika Melia's case.