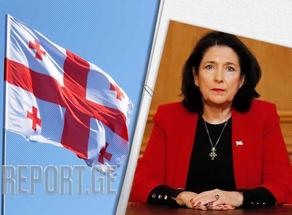 The President of Georgia, Salome Zurabishvili, responds to the forced landing of a Ryanair plane in Belarus and the arrest of Roman Protasevich, a Belarusian opposition journalist.

"The forced admission of a Ryanair flight to Belarus and the arrest of a journalist are unacceptable. It violates many international norms that cannot be ignored," Salome Zurabishvili wrote on Twitter.

On May 23, a Ryanair plane flying from Athens to Vilnius landed in Minsk following reports of a bomb on board. It was later revealed that this information was not confirmed. Meanwhile, one of the passengers of the flight, opposition Belarusian journalist Roman Protasevich was arrested.

In Belarus, Roman Protasevich is accused of organizing mass riots in Minsk and "inciting social unrest" against the government and police.