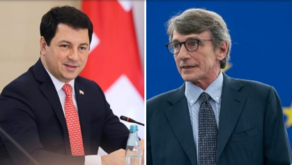 In a remote conversation, the Chairman of the Parliament of Georgia Archil Talakvadze, discussed the ongoing political developments, coronavirus vaccine availability, and reforms in Georgia with the President of the European Parliament, David Maria Sassoli. The parliament's press office says that the high officials had a telephone conversation.

Mr. Sassoli positively evaluated the reforms by Georgia under the Association Agreement and reaffirmed the EU's support of Georgia on its path to integration.

The President of the European Parliament underscored the necessity of resumption of the political dialogue between the Georgian government and the opposition, thanks to Charles Michel, and expressed hope that tensions would be reduced in the country.