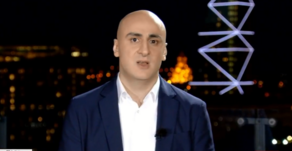 The United National Movement head Nika Melia will run as a united candidate for the post of Tbilisi mayor.

Melia declared at the ceremony at which candidates were presented that ''Tbilisi's victory is the victory of Georgia'' and vice versa.

In the UNM head's words, Tbilisi must return its function, with its driving force becoming young people again.

Nika Melia nominated Elene Koshtaria as the united candidate for the post of the Tbilisi Assembly chairperson today.