An Indian woman shot at pausing dancing at the wedding 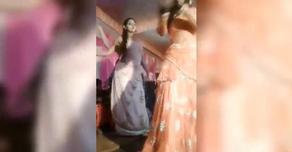 The Indian dancer was shot for pausing dancing at the wedding in India. She was wounded in the face. The incident happened during a wedding celebration on 1 December in a village in Uttar Pradesh state. The dancer has been hospitalized.

In a video of the incident that has gone viral in the internet, the woman is seen dancing on a stage.

When she stopped, there had been warnings: an initial gunshot, and then that voice, that rowdy drawl: "Goli chal jaayegi." (the shooting begins). She pauses, a gunshot is heard, and the woman falls down while holding her face.

The dancer, 22, suffered an injury to her jaw but is said to be out of danger.

Two people who fired shots have been arrested.

According to locals, such cases are often in Indian weddings.

This video is from UP's Chitrakoot .The lady was performing at a wedding and was shot by a man , possibly drunk, because she stopped after the music system development a glitch. She took a bullet in the jaw , hospitalised in Kanpur. @chitrakootpol says trying to make arrests pic.twitter.com/f9vVYopcYL