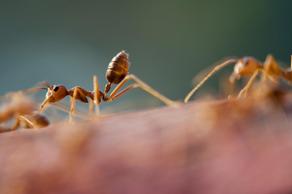 Ants respond to social isolation the same way as humans and other social mammals. New research by science shows that the behavior of ants changes after their social isolation. Scientists were amazed that immune genes and stress genes were suppressed in the brains of isolated ants; phys.org spreads the information about the study.

"It makes the immune system less effective - this phenomenon also manifests during the social isolation of people, especially now during the COVID-19 pandemic," said one of the study's authors, Professor Susanne Foitzik.

According to the study authors, isolation from the group is perceived as a stressful environment, negatively affecting well-being and physical health.

As part of the experiment, a research team studied the species Temnothorax nylanderi. They separated several of them from the group and kept them in isolation for 1 to 28 hours. Observations revealed three aspects of altered behavior. After the isolation was over, the ants were less interested in the behavior of the older ants in their colony; instead, they devoted more time to younger ants. They also spent less time taking care of themselves.

The results of the study on genetics were even more astonishing. Various genes related to immune system function and response to a stressful environment were suppressed after isolation. It means that the functioning of the genes was less active.